Inside the Hidden World of German Frats

After studying for 12 long years, some of us have the privilege of attending university. Many students choose to go abroad and live an adventure, I chose to go to Munich, Germany. After a couple of weeks at my international business school, I felt like something was missing. I was learning about the Iranian culture and a couple of words in Russian, but not really living the Bavarian culture. This frustrated me. Long story short; I looked for a way to integrate into the German student life, so I joined a frat.

German fraternities work differently compared with American fraternities. Every frat represents different values, ideas or interests. Most frats belong to the KSCV (Kösener Senioren-Convents-Verband) and frats that represent similar values can form groups that identify themselves with similar colors, which belong to a “circle” or a cartel. Most of them have websites which explain their ideology and how you can contact them.

How I joined a frat

I read a couple of websites and found a fraternity that had similar values and interest as mine, so I introduced myself very honestly and expressed my interest in knowing more about the fraternity. After a while, they invited me to a Pipes and Tobacco Seminar, the dress code was semi-formal. The house was quite huge, and astonishingly, there were only men at the event. Everyone spoke the typical German dialect from Bavaria which I couldn’t understand, this left me being as charming as a colorless rainbow.

As we learned the variety of tobacco and pipes that mankind has come up with, everyone began to drink beer, so I started drinking beer, “but wait, this tobacco variety has to be enjoyed with XYZ Scotch” and let us not forget “you can get a stronger flavor when you combine this type of tobacco with this type of rum.” By the end of the seminar, there were spirits representing half of the world in my stomach. Soon after the “senior” approached me, which is the highest in command at the frat or as the Germans like to call it; the “corps.” In a private room, he proceeded to explain, in the most basic terms, how everything in the frat works.

Most frats have mansions. Many are renovated or just post-WWII houses, for obvious reasons. There is a lot of tradition in all of the frats and the majority exceed the 200-year benchmark. The official sport the frats practice is a traditional variant of fencing.

How the frat works

There are “alter herren” (older men), who were active (aktive) in the events of the frat when they were younger and studied. Now, they are the stockholders of the frat, in a way. They can come to any frat party and can always come to the house and enjoy a beer (they even have a key). The “alter herren” also pay a yearly fee to keep the frat going and cover any costs the frat may have; (because well, they don’t study anymore).

Then come the “inactive” members, which are people that form part of the frat but are no longer active. The differences between them and the “alter herren” is that the inactive members don’t pay yearly fees. The reasons can vary, from not having a stable income, to still studying, just beginning to work or just not wanting to pay.

In the third level, there are the “active”, which are the people in charge of running the frat. The highest authority is the “senior”. Even when the “alter herren” are around, he is the maximum authority. He makes all the major decisions and is responsible for the success of the frat. He can be compared to a CEO.

Then comes the “con-senior” who trains all the active members in fencing and keeps track of the financial matters. He can be compared with a CFO. Next is the “sekretar” which is the secretary of the frat and can be compared with an executive secretary. The second-to-last position or management is the “fuchs-major”. He is in charge of all the “füchse” or foxes, which is what we call the newbies in the frat. If there is anything lower than being the non-paid coffee boy in a company, then the “füchse” are that. The senior, con-senior, sekretar, füchs major and füchse are all active in the frat. 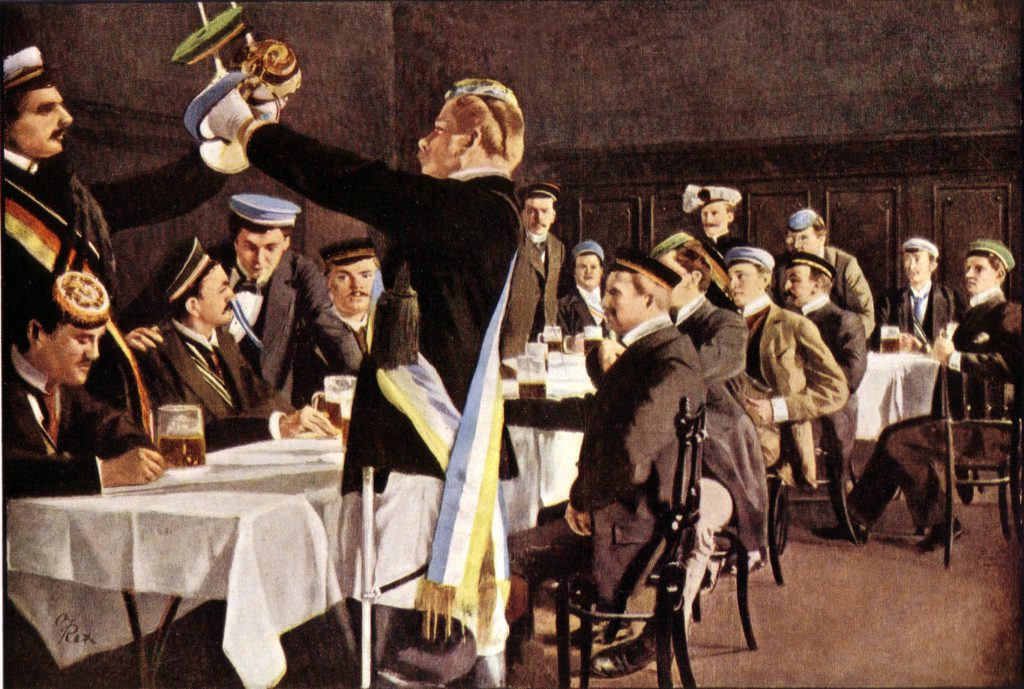 The active members receive a bunch of perks and money in return for their work sustaining the frat. Some of the benefits the active members receive are: paid trips to various locations in Europe, budget-free parties, an unlimited supply of beer, being able to live in a huge house, access to a big network of people, and above all, having a home away from home. Most of the students at the frat are far away from their families. Some are 500 kilometers away, some are half a world away and when they are at the house, they are one big family. The “alter herren”, the inactive, the active and the “füchse” all help each other to form a small community.

I must also mention that sufficient knowledge of the German language is needed to get into a frat. Some student organizations might take you in if you don’t speak German, but it varies depending on where you are. There are also student sororities, only for women; I am not very familiar with how they work – sororities that is.

Would I recommend German fraternities? Yes, but frat life can be extreme sometimes and it may not be for everyone. All are frats the same? Not all frats are the same or behave in the same way, so make sure you find the ideal one for you. Beer? Yes please.

Find out more about the EU programs on offer on our Munich campus.